Our Pastor | Our Staff | Our Doctrinal Statment 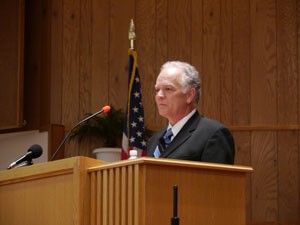 The atmosphere in my childhood home was semi religious, leading to my philosophy by the time of my Navy enlistment in 1973 that all paths led to God—though because of my sins, I felt I could not go to heaven
My high school sweetheart and I were married in 1975, and by 1980 deteriorating circumstances in our home motivated us to take our two baby daughters and begin attending church.
Following Bible principles, our marriage improved, and I became a better man.  My pastor told me that in light of these changes, coupled with the fact that I had gone forward in a church service as a nine year old boy, I must be saved. Further Bible study and application of the truths I learned brought me so much enjoyment that I began sharing these things with others.
Finally, in the fall of 1981, I enrolled in Tennessee Temple University to pursue pastoral studies and learned more wonderful truths, the two most notable of those being who Jesus really is and His wonderful gift of salvation.

(Neither as a nine year old boy nor as a 25 year old man had I known these truths, but I concluded that God knew I would learn them later in life, so He went ahead and saved me when I was nine.)

After finishing my studies at Tennessee Temple University in 1985, I began my first pastorate, still clinging to that “nine-year-old” profession (whatever that was).

(During this time, two Bible passages kept bothering me:  Matthew 7:21-23 in which the Lord disclaims certain individuals performing works in His name, and Ephesians 1:13,  “In whom ye also trusted, after that ye heard the word of truth, the gospel of your salvation: in whom also after that ye believed, ye were sealed with that holy Spirit of promise,” “What did I believe when I said I believed?” was the recurring question haunting my mind.)

Through the Scriptures, God revealed to me that I was a lost sinner.  He then used them further to give me additional knowledge I desperately needed and opened my understanding to the point that I rested in thefinished work of Christ for mankind’s redemption.

After 10 years of church and ministry, I was truly “born again” and have never doubted or questioned the sufficiency of the suffering of Christ Jesus on my behalf.
Like Apollos in Acts 18, my “calling” is to keep preaching that Jesus is the Christ who died and paid for the sins of the whole world.
Pastor David Rowan

We believe that the Scriptures—both the Old and New Testaments—are verbally inspired of God, are without error, and are the supreme and final authority for faith and practice (II Timothy 3:16).  We believe that God has preserved His inspired Word through time and the barrier of translation for English speaking people in the Authorized King James translation of the Bible (Psalm 12:6-7; Acts 2:5-6, 8, 11).  God’s approval is evident (Matthew 7:20).

We believe that there is only one true and living God Who exists in three persons:  the Father, the Son, and the Holy Ghost Who are one in essence but Who nevertheless possess distinct personalities and functions.

We believe that Jesus Christ is the Son of God—God in the flesh—who was born of a virgin and led a sinless life.  He came to shed His blood on Calvary as a satisfactory sacrifice for the sin of all people.  He was then buried but rose again bodily and ascended to the Father, according to the Scriptures.  God was in Christ reconciling the WORLD to Himself

We believe that the Holy Spirit is the third person of the Godhead, that He is equal with God the Father and God the Son, and that He accompanies the WORD of God to reveal its Truth (Matthew 28:19; John 16:13; 17:17).

We believe that Salvation is by grace apart from works (Romans 3:28; 4:5; 11:6).  The conditions for salvation are repentance and faith.  Since it is by faith, Salvation is a definite experience.  Salvation produces a new creature or creation (II Corinthians 5:17; Ephesians 2:10).  At Salvation, God sends forth into the heart of the believer the Spirit of His Son crying “Abba, Father” to assure the new Christian of his or her sonship (Galatians 4:6).  Men are justified by faith and are counted righteous before God only through the merit of the Lord Jesus Christ.

We believe in the future, second-coming of Christ and that it will occur in two parts.  In the first part, commonly referred to as the rapture, the saints will be caught up to meet the Lord in the air (I Thessalonians 4:13-17).  The second part will occur after the Judgment Seat of Christ when He will come—accompanied by His saints—in a literal, visible, personal, premillenial way to set up His kingdom.

We believe in the everlasting conscious blessedness of the saved and the everlasting conscious punishment of the lost. The lost, or unbelievers, will suffer for eternity in the Lake of Fire where the “worm dieth not and the fire is not quenched” (Mark 9:44, 46, 48).  The saved will ever live and abide with the Lord Jesus Christ (I Thessalonians 4:17).  Therefore, let us win others and comfort them with these words.